A Response Worth Waiting For

Have you ever submitted a song only to hear nothing back? Did you just assume either they heard it and didn’t like it, or they never heard it? Songwriters and actors get rejected more often than drunk guys with hackneyed pick-up lines. It’s just what happens. We send the song off and we never hear back. At least that’s what used to happen when we sent songs through the mail, before the internet and streaming.

Well, in the seventies, my manager sent one of my songs to Frank Sinatra. First of all, I should say that my manager was Bullets Durgom (George Durgom but everyone called him Bullets). He had been friends with Sinatra since they both worked for the Tommy Dorsey Orchestra. Bullets introduced me to Frank Sinatra in Las Vegas around 1976 after one of Frank’s shows. I shook Sinatra’s hand and he told me he liked my song. Unfortunately, he did not mean the song I had sent him. He meant “Ain’t No Way to Treat A Lady,” so I figured it was the only song of mine he’d ever heard.

Fast forward to last Christmas Eve, 2018. My husband and I were having dinner with my niece and her husband whom we spend every Christmas Eve with as well as their good friends, the Pignones. Charles Pignone is the president of Frank Sinatra Enterprises. As soon as we walked in, he said he had something to show us. He asked if I wanted to wait until after dinner and, considering how excited he was, I said definitely not. He pulled out a yellowed envelope with a cassette inside it. Apparently, Frank’s long-time secretary has been going through the estate pulling out every piece of paper with Sinatra’s signature, at the request of Frank’s daughter, Tina. With a big smile, Charlie pointed to a note signed by Frank (with his initials) written to his musical director, Sarge, on the envelope containing my song:

That was all it said, but according to Charles, this was high praise. And as far as I was concerned, it was well worth waiting decades for. And it taught me not to assume that just because we don’t hear anything, that the person never heard it.

I had totally forgotten how the song went, but Charlie was nice enough to make an MP3 for me. When I heard it, I shrugged and thought “not bad.” 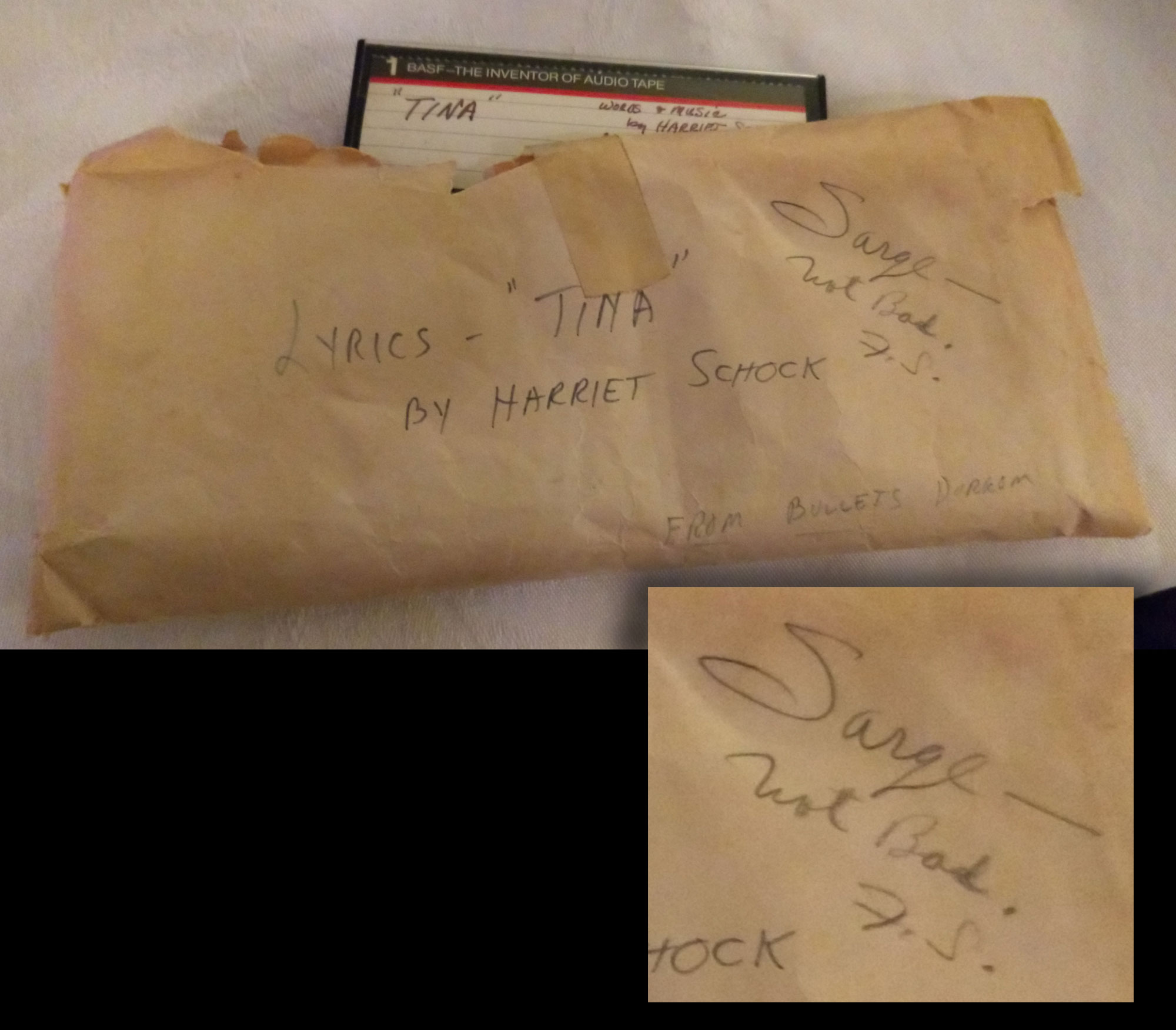 Harriet Schock wrote the words and music to the Grammy-nominated #1 hit, “Ain’t No Way To Treat A Lady” plus many songs for other artists, TV shows and films. She co-wrote the theme for “Jakers! The Adventures of Piggley Winks,” currently showing in 30 countries. She and her band were featured in Henry Jaglom’s film “Irene In Time” performing 4 of Harriet’s songs. She also scored three other Jaglom films and starred in “Just 45 Minutes from Broadway.“ Jaglom’s recent film, “The M Word,” features Harriet’s song “Bein’ a Girl,” performed on camera at the end of the film. Karen Black wrote the play, “Missouri Waltz,” around five of Harriet’s songs, which ran for 6 weeks at the Blank Theatre in Hollywood as well as in Macon, Georgia. In 2007, Los Angeles Women in Music honored Harriet with their Career Achievement and Industry Contribution award. Harriet teaches songwriting privately, in classes and a popular online course by private email.